Boston Drain Company is proud to serve our local community with quality, affordable plumbing and the best in customer service. Hear testimonials from some of our satisfied customers:

“I called on a Sunday and was able to have someone come hours later to fix a problem with my toilet by snaking it out. I also was happy about how nice and friendly Mike (the guy fixing the toilet) was and how he gave me a special rate because Boston Drain does a lot of business with the building I live in! Much cheaper rate than Roto Rooter which I wrote a review on.”

“Great solution to a really, really not great problem. It involved sewage. And my basement. It was bad. Not something to write about on a site that involves food. So, I won’t describe the problem, but Boston Drain was great. 24 hour service. They came right over. They solved the problem. It was really inexpensive. What more could you want?”

“Make sure you are talking to Boston Drain Company at (617) 265-8888 out of Dorchester (Mattapan). I am in Newton and have used them for over 10 years (unfortunately I have a recurring problem with roots) and they have to come once or twice a year. The ONLY time I’ve had any problem with getting a quick response was one time during a period of heavy rains in Boston, and they were giving hospitals and businesses priority service. They were very honest and told us it would be several hours. Usually they come in 2 hours or less. They ended up coming to our house later that day at 10:30 pm! Every service man has been polite and helpful. I would not use anyone else.” 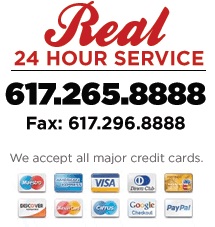